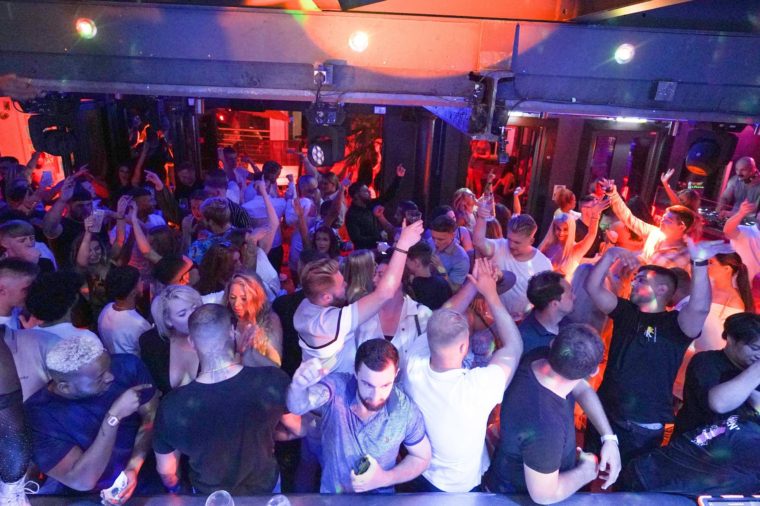 People eagerly awaited to enter London’s G-A-Y Heaven and other nightclubs across the UK.

As the clock ticked towards midnight, the chairs, tables and protective screens that have been in place throughout lockdown to comply with government rules were stripped down and the “freedom day’ party erupted in full swing.

Benjamin Butterworth was live at the first club that opened up, he filmed it and the video went nuts.

“At the stroke of midnight it was pretty incredible because the venue I went to for COVID compliant bar,” Butterworth, a Late Editor & Senior Reporter at iNewspaper, told tickerNEWS live from London.

“In fact, the owner of the club called it the (New Year’s) Eve we never had.”

Butterworth said most people were out in London, mainly people in their 20’s and younger.

“18, or 19 year olds have never had the chance to go to a nightclub. There was not only a palpable sense of excitement, but it was also quite emotional.”

Butterworth was in the DJ booth, because he was filming from there, and said the woman who was doing the DJing, wiped away a tear, as it got to midnight and people partied again.

“Aa lot of young people have given up so much during this pandemic to protect their peers, and rightly so in my opinion. But now it’s time as the vaccine has been rolled out so well in the United Kingdom, to get that freedom back and to have some fun,

However, he notes that “of course, scientists say that because we vaccinate, double vaccinated, so many people, the link between gaining COVID and being hospital has broken”

“But people in there could obviously get COVID, there’s a very real chance that someone could have had it in there. But the chances are, they won’t get it.”

He is hopeful the government welfare is going to change the rules in England to say that you have to be double jabbed to go into a nightclub from September when the rollout will have completely finished for everyone over the age of 18.

“So they’re going to tighten the rules a bit. But you know, just to have had that moment, just felt pretty special,” he said on tickerNEWS.

Are people scared to be in crowds and clubs?

Butterworth said you don’t have to wear face masks, for example, not by law in supermarkets or on public transport, “but the vast majority of people are still choosing to do it. I think it will be a while not because of the rules, but before people feel safe in themselves.”

He thinks there are a lot of people that won’t return to nightclubs or to full capacity theatres in London’s famous West End for a while, because they’re still nervous about the spread of COVID.

“So I think there’s a lot of certitude to the age, the polling in this country, it says a quarter of people thought nightclubs should be permanently closed. So there’s a lot of attitudinal change that we still need, I think to get back to life as normal, I dare say will be next year,” he said.

“And because it’s been so long for us because we’ve had a turbulent time in the UK with COVID. Seems like the one now that’s so familiar to people,

Dominic Cummings also says the PM messaged him to say “I no longer buy all this NHS overwhelmed stuff.”

It follows reports from Cummings that Johnson wanted to let COVID “wash through the country” rather than destroy the nation’s economy.

The BBC is expected to air an interview with Cummings, in his first one-on-one interview during his political career.

Meanwhile, thousands of UK residents have partied the night away as the nation scaled back its strict COVID restrictions.

Warning not to travel to UK

The US State Department has issued a warning advising American residents to avoid traveling to the UK as the Delta variant continues to spread at rapid rates.

The warning comes as England celebrates “Freedom Day” and moves into a society free of Covid-19 restrictions.

Health Officials have boosted their travel alert to “Very High” saying travellers to the U.K. should wear a mask and stay at least 6 feet away from other people”.

The UK recorded more than 54,000 cases of coronavirus on Saturday and over 47,000 on Sunday and is the current pandemic epicentre.

Freedom Day also coincided with a worldwide drop in stocks, with investors choosing safety over airlines, cruise companies and other industries that rely on the end of Covid-19.

‘This is a dangerous time’ – three Australian states in lockdown