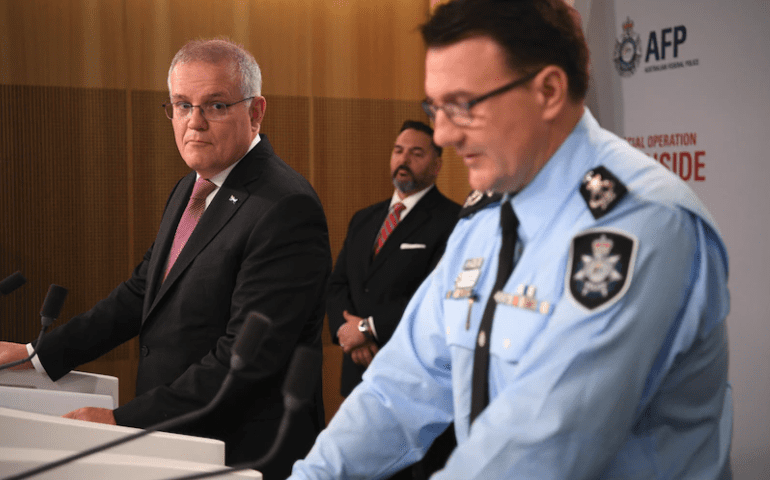 Australian Federal Police and the FBI have smashed an industrial-scale drug trafficking ring in what’s being described as the plot of the century.

The audacious police sting targeted an encrypted communications app that was being secretly monitored by police, leading to hundreds of arrests of organised crime figures in 18 countries.

Mafia figures, bikies, South American drug cartels, Asian triads and Middle Eastern and European crime syndicates are alleged to be caught up in the sting.

Police said they uncovered 21 murder plots and seized more than 3,000 kilograms of drugs and $35 million in cash.

Over 800 suspected members of organised crime gangs were arrested and $148 million in cash seized in raids around the world. Tons of drugs were also seized, officials confirmed.

Police say they were using the trojan horse app ANOM that was operated by the FBI and secretly monitored by the Australian Federal Police.

The app was used by organised crime gangs around the world to plan executions, mass drug importations and money laundering.

The plan is said to have been hatched by an AFP tech guru in 2018, with the AFP planting pre-loaded mobile phones into the hands of criminals.

300 search warrants were carried out across Australia on Monday night, with simultaneous stings in the US and Europe, according to reports from the ABC.

Police say they have exposed the secret relationships between bikies and syndicates who were thought to be enemies.

“This is a watershed moment in Australian law enforcement history”

Prime Minister Scott Morrison said the operation had “struck a heavy blow against organised crime. Not just in this country, but one that will echo around organised crime around the world”.

Morrison has reiterated calls for stronger border security and anti-encryption laws off the back of Operation “Ironside.”

“The most significant policing operation in Australian history”

Worldwide, 9000 law enforcement officials were involved in the operation, with over 4500 of those officials being Australian Federal Police.

Commissioner Kershaw said federal agents had been in the “back pockets” of criminals through the encryption app.

The plan that began over beers

“Some of the best ideas come over a couple of beers,” AFP Commissioner Reece Kershaw said in his address to media on Tuesday.

The FBI’s representative Anthony Russo says he’s proud to represent the US and stand with his Australian colleagues.

“In today’s world, crime continues to transverse international borders. The threats we face are too diverse and too complex for any one organisation to tackle alone,”